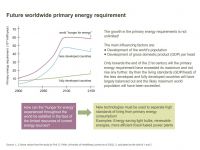 Chart:
Forecast development of primary energy requirement worldwide, broken down into industrial countries and not yet fully developed countries.

Beschreibung:
The chart shows the worldwide annual need for primary energy sources in the period 2000 to 2150 (estimate from the year 2002). The primary energy requirement is given in the unit of 1,013 kWh/year and takes into account the development of population figures and of the GDP per head with increasing industrialization. The chart shows clearly that growth is not unlimited.
Incidentally: In Germany, the primary energy requirement has remained almost constant since 1990, even though GDP has risen by approx. 27% since this date.

Information and ideas:
Starting with this forecast, there could be discussion as to what the consequences could be for fossil energy resources and renewable energy sources. What are the forecasts for the development of the world's population and GDP per head? Information on this is provided in the study carried out by Professor D. Pelte from the University of Heidelberg.