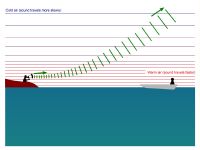 So verweisen Sie auf das Medium
Beschreibung:
The speed of sound in the air depends on the density and thus the temperature of the air: At high temperatures, the sound travels faster than it does at lower ones. So when sound moves from a warm layer of air to a colder one, its speed decreases.
However, the direction in which the sound spreads also changes as the speed changes. It is said that the sound wave is “broken”. In the case described, i.e. when sound moves from a warm to a cold layer of air, the sound wave is broken upwards.

Information and ideas:
How does sound behave when it moves from a colder to a warmer layer?
Is it correct that you hear worse against the wind than with the wind?
The latter can be checked together with students in an experiment.
A comparison with the refraction of light rays can be made.