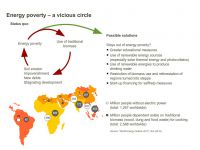 Beschreibung:
The energy poverty situation is shown as a vicious circle, since the causes and effects (for example, soil erosion through deforestation) of current energy poverty are mutually dependent. The occurrence and worldwide distribution of energy poverty are illustrated using a map of the world with statistical data. Energy poverty is characterized here by a life without electric power where only traditional biomass is used. This situation affects billions of people worldwide, mostly in rural regions in developing countries. To break the vicious circle described here, solutions need to be provided in the form of targeted measures within the countries affected combined with effective aid from the outside.

Information and ideas:
Students are to become familiar with forms of energy poverty and their extent and thus recognize the mutual interconnections and the global scale of the problem. For this, for example, it is possible to ask questions about how far their own country could be affected by the problems of energy poverty. In addition, the solution approaches provided could be detailed and expanded, possibly taking into account the distribution of work, responsibilities and financing viability.