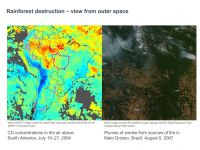 Photos:
Satellite images from NASA show rainforest destruction in South America and in the region of Mato Grosso, Brazil, in 2004 and 2007 respectively.

Beschreibung:
Left photo: Many gases are produced during slash-and-burn, including great amounts of carbon monoxide (CO). The concentrations of these gases in the air were recorded by a NASA satellite from July 19 to 27, 2004. The red and yellow areas indicate the regions with higher CO concentration in the air. The region of Mato Grosso is outlined (purple line).
Right photo: Road construction smooths the way for slash-and-burn. The NASA satellite image of the region of Mato Grosso, Brazil, taken on August 5, 2007, shows the plumes of smoke associated with slash-and-burn. The sources of fire are marked in red. Their course along a road is clearly visible. The unspoiled areas of the rainforest are green, and the deforested areas are brown.